Kazu Tadano Finds His Way to the Gay Bay 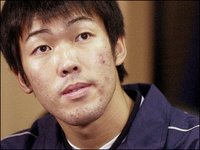 Kazu Tadano (left), the promising Japanese pitcher whose career was ruined in his native country after he starred in a gay porn video, has arrived just across the water from the gay capital of the world. Tadano, 26, finds himself on the shores of San Francisco Bay under contract with the Athletics after being traded from Cleveland. The former actor has been relegated to Oakland's AAA team in nearby Sacramento. Tadano was run out of Japanese baseball after the video depicted him in a graphic act with another male performer. The pitcher later described his decision to appear in the gay video as a youthful mistake for which he has apologized. He says he doesn't mind fans' catcalls because he can't understand English anyway. Tadano insists he's not really gay. Apparently, he was just acting gay.
Posted by Greg Fieg at 2:59 AM