Any number of analysts, scouts and various other prognosticators have foreseen a potential big, big production spike coming for Astros outfielder Hunter Pence as he approaches the prime of his career, but will 2010 be the year? 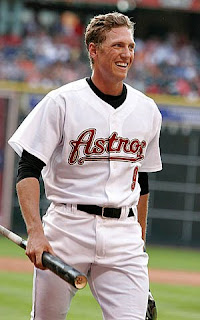 Don't put it past him; any player of Pence's talent can have a career season not only any year but maybe even every year, says newly appointed Astros manager Brad Mills.

"With him you don't have to worry about peaks and valleys," said Mills during the first day of baseball activities at Astros spring camp at Osceola County Stadium in the Orlando Fla., suburb of Kissimmee.

"We just have to let him be Hunter Pence," Mills said.

And Pence, who in 12 days will observe his 27th birthday, is doing just that, establishing himself as the prototypical first player to arrive in the morning and the last to go home at the end of the day. With position players not expected to arrive until next week, Pence is on the job already, having shown up in camp even before pitchers and catchers to put in a full day of stretching, running and other drills, including some two hours of hitting in the cage.

Is he working on his swing?

"Right now I'm working on the World Series," Pence said lightheartedly yet hinting he thinks the sky's the limit.

Though Pence put up an arguably career best season last year with 25 homers and a .282 batting average, he seems to feel he can reach the next level by putting greater emphasis on his mental approach.

In addition to training all winter under the tutelage of strength and conditioning coach Gene Coleman at Minute Maid Park in Houston, Pence studied various baseball manuals, managers' memoirs, how-to books and even such philosophical essays as "The Art of War," by Sun Tzu, whose thoughts have influenced military leaders from Napoleon to Douglas MacArthur with an emphasis on conditioned responses in fluid situations.

"It's only 100 pages but a I read it twice," said Pence, a former honors student at University of Texas at Arlington.

The six-foot-four, 205-pound phenom, who added about five pounds of muscle during the offseason, wants to cultivate what some trainers have called "muscle memory," in which the body's response is not so much a consequence of the brain's premeditation as it is an automatic reaction, something achievable through repetition.

Pence hopes to counteract his propensity to tinker with his mechanics so that he may "build a foundation for my swing." Whether that means he is approaching a magical career year he won't predict.